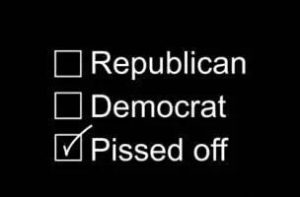 Many years ago someone told me that politically I mattered, that I could make a difference in the world around me. I half smiled in response and gave a polite nod. It took a long time for me to understand that he was right. He wasn’t right because of any special skills I harbor; he was right because I am a free individual with a voice and a vote.

Here me on this… the only way we will change things is in the Primary Elections – not the General Elections.

If you are like most people, you don’t pay a lot of attention to the primaries… especially in an off-Presidential election year. It’s understandable; people have things to do and lives to lead… and the candidates all tend to sound the same, speak the same, and promise the same things (which they will many times go on to ignore after being elected).

This is, however, one of the weaknesses in our two-party system that the Ruling Class has learned to exploit. By the time the general election rolls around to elect a President, Senator, or Congressman, the non-Ruling Class Politicians have many times already been eliminated. Democrats and Republicans will always be in different camps, but at the end of the day if all the candidates for an office are of the elitist Ruling Class culture, what difference does our general election vote really make? The Ruling Class wins either way and We the People lose. Again.

The Ruling Class has learned to stack the deck in the primaries where few people are paying attention. Most people registered as Democrat or Republican more or less tend to trust their parties; they pop their heads up around general election time, get a feel (as much as they can) for what the issues are, vote for their party’s recommended candidate, and then go back to living their lives. This, again, is especially true for Senate and Congressional elections that fall directly between presidential elections.

If We the People truly desire for President Trump to drain the swamp, and if we want those gains to last longer than eight years, then we must help him now. We must immediately start replacing the Ruling Class Politicians in Washington DC. StressFreeBill totally rejects the idea that you must be a professional politician to serve as an elected official. I could care less whether we replace them with plumbers, attorneys, factory workers, insurance salesman, doctors, or stay at home mothers… As long as they are intelligent individuals that can be transparent with the American people, as long as they are true patriots that will place America First, StressFreeBill will vote for them. And I hope you will too.

Every two years there is a Senate and Congressional election. The six-months-to-a-year preceding these elections are when the primaries are held. The six-months to a year prior to that is when the critical Primary Election campaigns are waged – there is very little down time in this repeating two-year cycle. Depending upon when you are reading this, it may be before, during, or after a primary election. Regardless of the timing, I recommend that you register for primary election updates by email, and bookmark this site. As each election approaches we will identify and highlight which incumbents and challengers are Ruling Class Politicians and which are not. It is my hope that you will support the anti-Ruling Class candidates even if you do not live in their representative districts or states.