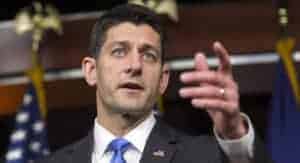 Think of it like this… An MD might recommend surgery to alleviate back pain whereas a chiropractor might recommend spinal decompression therapy. Both highly respectable doctors might strongly argue for their solution as the best treatment plan, but at the end of the day they would both recognize each other as competent health professionals. What if, instead, the patient decided to trust the diagnosis and treatment recommended by his plumber? This is so obviously absurd, and the medical profession protects its integrity so strongly, that it has been made illegal; you cannot practice medicine without a license.

Professional politicians look at things the same way. The thought of any outsider(s) running the government is just as absurd. Republicans and Democrats might diagnose problems differently and suggest opposing solutions, but at the end of the day they recognize each other as professional politicians and, therefore, the only ones competent to run the government. The problem is, our political system was never set up to be run by a professional class – and there are certainly no laws against practicing politics without a license. The Constitution of the United States does not provide for a professional political class and the Bill of Rights specifically gives We the People protections against it.

Being an elected official was never meant to be a profession (or a career). The fallacy of the arrogant Ruling Class culture is that they believe themselves to have special skills and arcane knowledge unavailable to other professions. StressFreeBill has no doubt that they would strenuously deny this attitude, but we are engaged in observing behavior and they behave exactly as if theirs is a protected profession that can only be entered by an extensive peer-reviewed vetting process…

Not to belabor the point, but this is in direct opposition to the Constitution of the United States which gives us a political system that can only be entered by an extensive We the People reviewed election process.

The Ruling Class is immersed in a culture that is incapable of believing that We the People can’t plainly see that they are the best suited to rule us. Election results like with Donald Trump may stun them, but they still fully expect the people to come to their senses and eventually walk away from the President. They are incapable of seeing through their bubble to understand that they are what the people have rejected. As shocked as they are by how thoroughly their professional class was rejected, it will not shatter their worldview. They will continue their duplicitous ‘nonsupport’, obstruction, and outright subversion of the Will of the People as expressed through the election of Donald Trump.

We must replace them. We must remove them from office. It is fallacy to hope that they will ‘come around’, ‘wake up’, and ‘smell the roses…’

Both Democrat and GOP Ruling Class Politicians are opposing, stalling, and subverting the agenda of President Donald Trump. They will continue to believe that the people will eventually reject him up until the day his second term in office expires… However, they will simply view that day as the beginning of a return to business as normal – therefore they are doing everything possible to stall his reform efforts until that day arrives. They will not acknowledge a new direction in America; they will not admit to being defeated by ‘populism’. If We the People truly desire for President Trump to drain the swamp, and if we want those gains to last longer than eight years, we must help him now. We must immediately start replacing the Ruling Class Politicians in Washington DC. StressFreeBill totally rejects the idea that you must be a professional politician to serve as an elected official. I could care less whether we replace them with plumbers, attorneys, factory workers, insurance salesman, doctors, or stay at home mothers… As long as they are intelligent individuals that can be transparent with the American people, as long as they are true patriots that will place America First, StressFreeBill will vote for them. And I hope you will too.

This is a nationwide movement to save our representative style of government, and StressFreeBill invites you to join it.