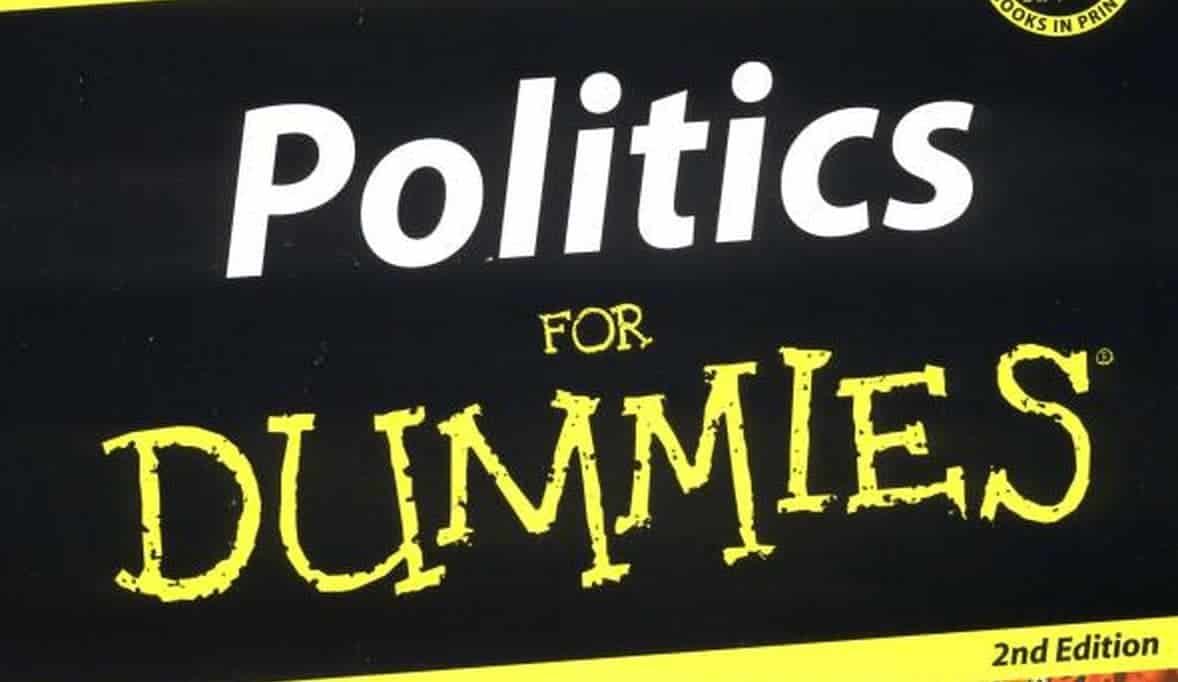 There are four major factions currently at work in American politics. The Ruling Class Democrat leadership, the radical socialist populist side of the Democrat party, and the Ruling Class Republican leadership are all totally focused on removing President Trump from office. The fourth faction, the populist America First Republicans, believe that the entire Russia Collusion narrative is a frame-up being used for a soft coup against a sitting US President. By nature, the coup effort is sophisticated and complicated. It all rests, however, on the central idea that Russia played a significant role in our 2016 Presidential election. We offer this simple Russian Election Interference for Dummies* article as a guide for easy understanding and clarification.

The following are all popular memes being pressed upon us by the establishment, Ruling Class, mainstream media:

The Russians hacked into the US voting infrastructure and changed votes to elect Donald Trump as President of the United States.

This is a false meme that neither Democrats or Republicans associate with. Our voting infrastructure and machines are not connected to the internet and it would be all but impossible to change vote counts without being at the site of the voting machine at the time of the voting.

The Russians interfered with the 2016 Presidential election by hacking into the Democratic National Committee (DNC) server.

One of the face-saving narratives John Podesta and the Clinton campaign started spreading immediately after their election loss was that the Russians were behind the embarrassing leak of information regarding the Clinton campaign’s rigging of the primary election against Bernie Sanders. It was the Russians, acting on Trump’s behalf, (they claim) that then fed the damning information to Julian Assange for WikiLeaks to publish.

There is ample evidence, both circumstantial and forensic, to doubt this premise. Forensic analysis of the ‘hacked’ files show that the download speeds used to copy them from the DNC server far exceed anything possible on the internet. The files were downloaded onto a thumb drive type of device; it was likely an inside job. The identity of the DNC employee that many strongly suspect of leaking the information is well-known in Washington circles and was a strong Bernie Sanders supporter. Unfortunately, he is no longer among the living and cannot be questioned. It should also be noted that a) the DNC refused to allow the FBI to inspect the ‘hacked’ servers, and b) WikiLeaks publisher Julian Assange has repeatedly insisted Russia was not the source of the leaked information.

17 US Intelligence Agencies concur that it was the Russians that hacked the DNC server.

James Clapper (National Security Director) and John Brennan (Director of the CIA) were instrumental in spreading this fiction throughout the media. As even the New York Times eventually had to admit, there were only three intelligence agencies that gave any assessment at all (NSA, FBI, CIA), and only two of them gave a ‘High Confidence’ rating to the assessment. This is most probably because, regardless of established FBI procedures and common sense, the investigating body (the FBI) never inspected the server. The DNC refused to turn over the computer and instead hired the highly partisan company CrowdStrike to do a private forensic analysis and provide those results to the FBI.

Therefore, we only have the word of the DNC, James Comey, John Brennan, and James Clapper that the Russians ever hacked the server in the first place – and the server has since been destroyed. The DNC has an obvious conflict of interest and all three of these Deep State bureaucrats have already been exposed as heavily pushing the debunked Steele Dossier. Their pushing of the ‘Russian interference’ meme is self-serving, possibly criminal, and should be highly suspect.

John Podesta’s emails were hacked by the Russians.

Also published by WikiLeaks were private emails phished from the Gmail account of John Podesta, a Democrat operative and close personal confidant of Hillary Clinton. These emails were especially damning to the Clinton campaign and are included in the Clinton campaign’s charges of Russian interference. John Brennan (CIA), James Clapper (Director of National Security), and James Comey (FBI), claim that a hacker going by the name of Gucifer 2.0 is actually a Russian GRU agent and is responsible for the phishing attack and providing the emails to WikiLeaks. Robert Mueller (Special Counsel) continued this narrative in the final Mueller Report. The media has accepted without question that this narrative is true and that the Russians are behind all of the leaked documents, however, the only evidence we have of this comes exclusively from these discredited individuals. It should be noted that a) Julian Assange of WikiLeaks denies that Gucifer was a Russian agent, b) the phishing attack that John Podesta fell for was unsophisticated and amateur in nature – nothing that would require the resources of a foreign government to instigate, and c) around that same time, sophisticated hacking software was stolen from the NSA; this software gives the hacker the ability to disguise their identity or even frame another entity as the source of the hack… is it possible Russia is being framed to fit this narrative?

The Russians were trying to sway the election for Donald Trump.

Russian companies did purchase ad space on social media platforms and ran political ads. However, many of these ads ran after the November 2016 election. A critical review of the ads exposes the desire to sow social discord as a much higher priority than promoting a specific candidate.

The campaigns were unsophisticated and financially insignificant. A total of $100,000 was spent on Facebook ads and even the most partisan sources claim only a total monthly budget of $1.25 million per month was spent (again, much of it after the election). These amounts are literally a drop in the bucket compared to total campaign spending that exceeded $1 billion.

Note: Just like the United States, Russia, and many other countries are constantly trying to interfere with other country’s elections. The point of this article is to illustrate that this had very little effect in 2016 and is simply being used as an excuse and a false narrative to throw doubt on the legitimacy of the Trump election – not to claim that we shouldn’t always be diligent of other country’s attempts to subvert our democracy.

Donald Trump coordinated and colluded with Russia to win the 2016 Presidential election.

The Clinton campaign paid for a false political hit-piece to be assembled in order to smear (then candidate) Donald Trump. This hit-piece was put together by foreign agents and accused the Trump campaign of colluding with Russia; it was not based in truth – it was never intended to be corroborated. This hit-piece became known as the Steele Dossier. The Mueller Report confirms that this is the only ‘evidence’ of Trump-Russia collusion and further states that there was no collusion.

Our Deep State used the false Steele Dossier to implement a coup on the President of the United States.

Our Deep State leaked the dossier to the media and used the dossier as evidence to get FISA judges to grant warrants (and used media reports on it as false corroboration) to spy on the Trump campaign. Our Deep State (high ranking individuals in the CIA, FBI, NSA, DOJ and other government organizations) then enlisted intelligence agents in the foreign governments of the UK, Australia and (probably) Italy to infiltrate, spy, and plant disinformation on individuals in the Trump campaign. After Trump was elected, these efforts transitioned into an effort to remove him from office. Robert Mueller was appointed as a Special Counsel to investigate the false narrative of the Trump campaign colluding with Russia.

If the above facts worry you or make you angry, they should. This frame-job was nothing short of a coup attempt to undermine our democracy and remove a duly elected President of the United States. The entire purpose of the Collusion investigation was to drive President Trump’s popularity down to the low 30s or upper 20 percentile. These low popularity ratings are what is necessary to successfully impeach a President.

Over the coming months, further corroboration and evidence of anti-democratic and anti-American shenanigans are going to come to light. It is very possible that the entire Obama administration will be exposed as guilty of violating Federal Law in their efforts to weaponize government agencies against their political opponents. It is almost a certainty that some administration officials such as John Brennen, James Clapper, Jim Comey and Hillary Clinton (among others) will be accused, and possibly prosecuted, for Federal crimes.

It is imperative the American people have the courage and the will to see this through. If we are not angry enough, if we are not determined enough to force our government officials to hold everyone accountable… If we do not insist that these authoritarian elitists be prosecuted to the fullest extent of the law, we will lose our democracy forever. If we don’t quash it now, this disaster will repeat itself and the next time we may not have a leader as strong as Donald Trump. Next time, we may lose everything.

* Not affiliated with the ‘For Dummies’ book collections.

All citations and references were curated from the PRC PAC Deep Dive Political Research Archives. Membership has its privileges. To learn more, request a PRC Membership Packet.