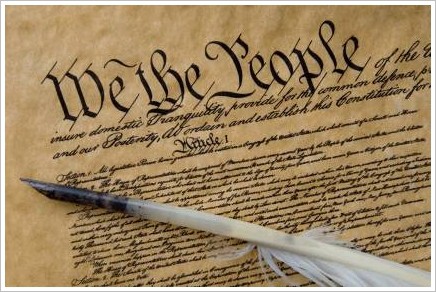 There are many that believe a soft coup is underway in the United States. The forces of globalism have helped cement a Ruling Class culture that pervades our government bureaucracies, our universities, our media, Hollywood, and politicians of both parties. These self-appointed elites are knowingly, or in many cases unwittingly, supporting a globalist agenda that is dependent upon denuding American sovereignty. What they all believe, however, is that they are smarter than you, that their truth is a ‘higher’ truth than yours, that they are better equipped to know what is best for you, and that they have a moral obligation to humanity to ‘guide’ the masses regardless of your desire or vote.

We listen to media pundits claim that the Republican Party is in disarray. That is untrue – it is undergoing a full-blown revolution.

As is discussed in the best-selling book, It’s Not About Donkeys and Elephants: Branding the Real Enemy, what might go down in history as the greatest accomplishment of President Donald Trump is that he has forced the self-appointed Ruling Class out of hiding. No longer can they pretend to be conservatives that believe in small government. No longer can they parade as liberals that care about the economic plight of minorities and the working class. They can no longer pretend to report the news fairly, just as they can no longer hide behind judicial robes or a civil servant’s oath to impartially implement policy. The Ruling Class culture that has enveloped so many of the professions central to the running of our government is not restricted to the Republican Party – far from it. But it has so deeply consumed the Democrat party (for example) that it will remain entrenched for the foreseeable future. The Republican Party, however, is a different story…

The Ruling Class Media is 100% focused on convincing you, The People, that the leaders of the Republican Party are turning on President Donald Trump. Whether it is CNN, MSNBC, NBC, or Fox News, they parade pundits and experts claiming good people of both parties can no longer put up with the bigotry and racism of Trump while the anchors and show hosts (with very few exceptions) solemnly nod in agreement. They interview Republican senators and congressmen lamenting President Trump’s supposedly soft stance on white supremacy. The New York Times and Washington Post publish articles calling for the head of presidential advisor Steve Bannon and then celebrate his resignation, asserting that he was a source of racism and the creator of what they call the ‘Alt Right.’

None of this is true. What is hard for We the People to understand is that 90% of the people making these ridiculous allegations know it isn’t true… For those that live outside the Washington bubble, for those of us not subsumed in the Ruling Class culture, it is very difficult to comprehend such a level of deviousness and groupthink.

Senator Bob Corker (R–TN), who recently denounced President Trump as unstable and incompetent, has never been a conservative Republican. That we can tell, he has never been of the people. He has always been of the establishment; what we now correctly label as a Ruling Class Politician. Many other so-called Republican leaders have revealed themselves or confirmed what we already knew.

Just for the record, President Donald Trump denounced racism, bigotry, and hate on both sides of the Charlottesville riots. He correctly pointed out that armed attackers from both the protesters and counter protesters willingly clashed with each other, embroiling otherwise peaceful protesters in the mêlée. President Obama, just like President Trump, when faced with acts of violence consistently took a couple of days to gather the facts before denouncing specific groups… yet the Ruling Class, of course, totally ignores this fact. What we must understand is that the label of racism and bigotry are the newest club the Ruling Class is using to try to dethrone President Trump and thwart the will of the people as expressed in the 2016 election. Just like with the Russian collusion narrative, facts have nothing to do with their strategy.

As a matter of fact, it is telling that almost to the day when the Russian collusion narrative collapses (there is now strong evidence there was no hack of the DNC to begin with) the Ruling Class immediately jumps to a new hammer (racism and white supremacy) to cudgel him with. Actually, it’s an old hammer; they tried this (unsuccessfully) during the presidential campaign. The fact that they are resorting back to a failed strategy to undermine President Trump is also telling; they are desperate.

Slowly but surely the swamp is being drained. President Donald Trump represents the outsider. He is a billionaire that is not of the Ruling Class culture. He is not a globalist. He believes in American Exceptionalism. He believes in putting America and the American people first. Whether you voted for him or not, and as imperfect as he may be, he is leading the charge against the Ruling Class that would sell our sovereignty in the name of their ‘higher’ vision.

If you only follow the Ruling Class Media you would probably be unaware of the plethora of accomplishments already notched by his administration. The swamp is being drained. Ruling Class Bureaucrats (despite the purposeful slow-walking of Senate confirmations) are slowly but surely being replaced. Ruling Class Judges are watching their ranks being filled with men and women of integrity. Regulations, which have made it all but impossible for the mighty American economic engine to compete on the world stage, are being removed by the hundreds, and trade policies which are siphoning off American middle-class wealth and redistributing it to other nations are being renegotiated and reformed.

Next up on Trump’s agenda are the two cornerstones of the Ruling Class strategy: Immigration and Tax Reform.

The Reforming American Immigration for a Strong Economy Act (the RAISE act) recently introduced by Senators David Perdue (R-GA) and Tom Cotton (R-AR) and endorsed by President Trump will, among other things, cut legal immigration by 50% and give the unprecedented millions of legal immigrants we have swamped our culture with time to assimilate. This would be a stake in the heart of the globalists.

The Tax reforms President Trump campaigned on will likewise remove many of the incentives companies currently have to relocate in other countries and revitalize our domestic economy making his re-election likely.

The Ruling Class Oligarchs are in a panic. Trump must be stopped. The globalist visions of people like George Soros are in jeopardy. They are throwing massive amounts of money into supporting protests (like what we witnessed in Charlottesville) and public disharmony. They are funding organizations that promote racial discord and encourage opposing the rule of law. They have spent billions on promoting their globalist agenda and are desperate to stop it from slipping away.

These are not baseless accusations. All of these points are documented at the www.StressFreeBill.com website as well as in the book, It’s Not About Donkeys and Elephants: Branding the Real Enemy. But the Trump administration cannot win this battle by themselves; they certainly can’t win the war. They need our help. We the People, if we wish to preserve our constitutional protections against tyranny, need to stand up and add our voice and add our vote…

The title of this article is The War for Republican Independence. If We the People can take back the Republican Party from the clutches of the Ruling Class, we can reverse course on the anti-American trends of globalism and socialism. To do this, however, we cannot keep letting the establishment select our GOP candidates for the US Congress and the US Senate. We must get involved in the primary elections to ensure that non-ruling class candidates represent the Republican Party in the general election. Many good people simply don’t have the time to do the research and be heavily involved in primary elections involving their own state, let alone nationwide. This is why StressFreeBill has created the website, www.PrimaryTheRulingClass.com. Everyone should go to this website and bookmark it now. It is being populated weekly with information regarding incumbent Ruling Class Politicians and their primary opponents. You can vote for your own representatives, and you can donate to Ruling Class opposition nationwide.

Whether you donate even $10 or not is up to you… But it is the responsibility of all of us to stay somewhat informed and use our voice. StressFreeBill is All In – What about you…?

To learn more about the Primary The Ruling Class Movement, go HERE.