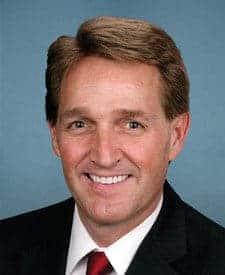 In the opinion of StressFreeBill, Arizona Senator Jeff Flake is the epitome of a Ruling Class Republican Politician.

He arrogantly believes he is smarter, better informed, and in a better position to make decisions for The People than they are themselves.

He studiously ignores the voices of Arizona Republicans and his own constituents and openly opposes much of the expressed Will of the People nationwide. He was a strident supporter of the Jeb Bush/Karl Rove side of the party during the Republican primaries of 2016. Even after Donald Trump clinched the nomination he remained a vocal Never Trumper and worked to undermine him in the General Election. He, along with Mitt Romney and others, openly advocated for Hillary Clinton over Donald Trump.

Since the election, he has continued to undermine the President and the agenda that elected him. As a classic example of a professional politician practicing his duplicitous craft, he voted to repeal and replace Obamacare, all the while bad mouthing the administration’s efforts in this regard – and one can safely speculate that he only voted for it knowing that his fellow Arizona Senator, John McCain, was going to torpedo the bill.

According to polls, his popularity in Arizona is at an all-time low and he is considered vulnerable to a Primary challenge. But Mitch McConnell and other members of the Ruling Class will funnel a lot of money into fighting off his Primary challenger.

We don’t want the Republicans to lose the seat in the general election, but we do want to support the Republican challenger for the nomination, Dr. Kelli Ward. The Arizona Primary election will be held in the summer of 2018.

For information on how to vote for and support Kelli Ward’s campaign, go HERE.

Don’t live in Arizona and/or don’t have much to donate? That’s ok… read these strategies on how you can make a difference.