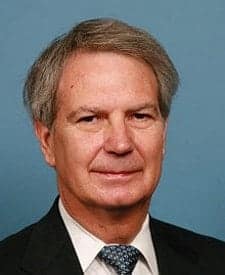 Primary Election for Republican nomination: May 8, 2018

In the opinion of StressFreeBill, Walter Jones needs to be defeated in the GOP Primary Election for North Carolina’s 3rd District Congressional seat.

Walter Jones is an eleven-term professional politician who was the first Republican to call on Rep. Devin Nunes to step aside from leading the House Intelligence Committee’s probe into alleged ties between Russia and Donald Trump’s successful presidential campaign. Furthermore, the incumbent Rep. Walter Jones (R -NC) wrote House Speaker Paul Ryan to demand a special committee to investigate the Russia probe – these actions alone qualify him as an anti-Trump, anti-outsider, Ruling Class Politician.

Walter Jones is a former Democrat and the son of a twelve-term US Congressman. He is the epitome of the swamp and through the first five weeks of the Trump Administration, no Republican voted against the Commander-in-Chief more often than Walter Jones. He is quoted as saying Bill Clinton was the best President he ever worked with.

His opponent, Scott Dacey, has the endorsement of Gov. Mike Huckabee who says Scott Dacey is “a strong conservative supporter of low taxes and low regulation… (whose) constant support of the right to bear arms, and his drive to rebuild our military is one of pure distinction.”

Scott Dacey declares himself as a strong supporter of President Trump’s Make America Great Again Agenda and promises to stand up against the swamp. He is a newcomer and outsider to national politics and can replace one of President Trump’s strongest Ruling Class obstructionists, Walter Jones.

Paul Ryan’s Republican Establishment will shower massive amounts of money into Walter Jones’ reelection. Scott Dacey has nowhere near the same financial resources, yet we must find a way for him to win.

The specific date of the North Carolina GOP Primary Election is set for May 8, 2018.

Campaigns are underway now and your contributions are valuable.

For information on how to vote for and support Scott Dacey’s campaign, go HERE.

Don’t live in North Carolina and/or don’t have much to donate? That’s ok… read these strategies on how you can make a difference.