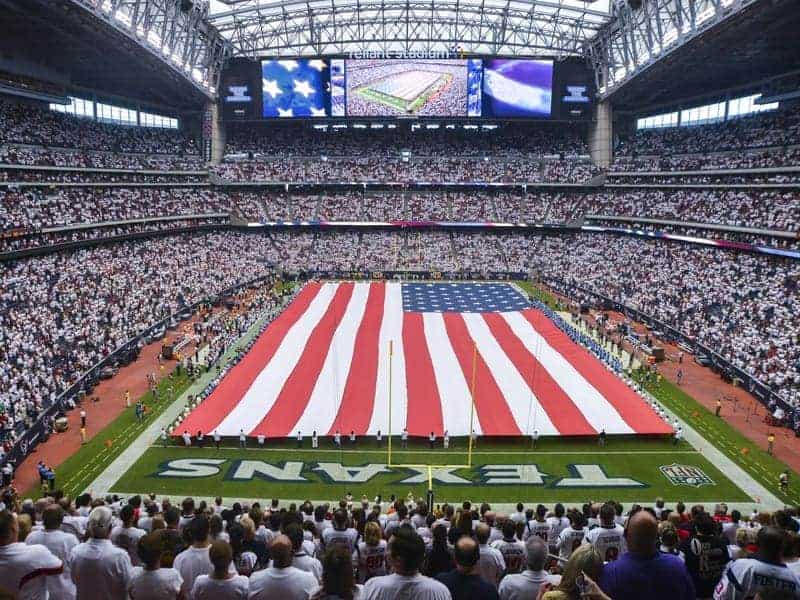 I think most people believe this is a really simple issue… If you are on the side that believes it is never ok to disrespect flag and country (as I am) then there is no excuse for NFL players to join the chorus of hate-filled anti-American celebrities that constantly bash Free Speech via Political Correctness, display ignorance of our constitution, and trash our country’s history and traditions. If you are on the side that believes America is a hate-filled society where the majority coddles endemic racism then you see it as simply a way to raise awareness and stand up to the bigots.

The reality, though, is slightly more complex. You see, there are more than two sides…

The unfortunate truth is that in any war, 90% of the frontline soldiers have no idea what motivates the powers and money pushing them to fight. Many frontline soldiers (on both sides) are good people simply being manipulated by forces they don’t understand. It has always been this way and probably always will.

StressFreeBill has made his reputation by exposing these forces so that people can choose who to follow – that is my contribution to society and something I feel very good about. As always, I don’t offer wild speculation, but rather documented facts with keen observation and thought-out conclusions.

We’ll call one side the America First Movement. These are the politically active among us that believe America is a force for good in the world (American Exceptionalism) and will fiercely defend American sovereignty and oppose socialism, globalism, and all the other forms of rule that threaten individual rights and freedoms.

We’ll call another side Black Lives Matter. BLM is a political movement based on the idea that police (and society in general) value black lives less than others. They point to higher incarceration rates for blacks, higher arrest percentages, higher poverty and unemployment levels, as well as inferior rates of education and income.

A third side, however, is made up of powerful multinational corporations and individuals that have a vested interest in the breakdown of traditional American society. StressFreeBill calls them Ruling Class Oligarchs. Theirs is a globalist vision that requires the reduction or dissolution of American sovereignty – and to accomplish this, they must first undermine the traditional values of self-reliance and respect for the Rule of Law as well as patriotism itself. Their strategy is to convince enough people that American society is so corrupt and unjust that it needs to be thrown out and replaced. How do we know this? Because they tell us so… George Soros (one of the richest men in the world) has spent billions to politically reshape the United States (and the world) into his vision. In one of his books, The Crisis of Global Capitalism: Open Society Endangered, he advocates the undermining of American sovereignty and specifically states that all countries must be subordinate to global tribunes and commissions. It is no coincidence that much of the billions of dollars he has spent are documented to have gone into organizations like Black Lives Matter, Occupy Wall Street, the Ferguson, Missouri protests, Standing Rock protests, Trump Rally protests, #NotMyPresident protests, the National Council of La Raza, the Brookings Institution, ACORN, Southern Poverty Law Center, and Open Society (among many others). It is also speculated (but StressFreeBill cannot document) that Soros money supports the violent antics of the Antifa group. In the opinion of StressFreeBill, George Soros and other Ruling Class Oligarchs are simply fanning the flames of social unrest and financing organizations that contribute to racial and social divides in our country. Regardless of whether you think they deeply believe in these causes,  or are simply taking advantage of naïve crusaders, their behavior and their money is demonstrably going to these pursuits – and many innocents are getting caught up in their manipulations.

There is a fourth side to this issue that is also guilty of mass manipulation. This groupthink has control of many of our schools and universities and has been indoctrinating our children for generations. Most people think of them as the far left. StressFreeBill calls them the Ruling Class Intelligentsia. Regardless of labels, these are academics of communist and socialist influence that preach anti-Americanism as doctrine. There is an unholy alliance of convenience between this group and the Ruling Class Oligarchs. The intelligentsia indoctrinates new generations to believe that America is no better than any other country (and then intellectually validates antisocial violence) while the globalist oligarchs finance the radical organizations and reap the rewards of a divided country. Sound conspiratorial? It’s not – This is all but an open secret in Washington D.C. I’m not going to spend any more space on it here, but for documentation and full understanding read my bestselling book, It’s Not About Donkeys and Elephants: Branding the Real Enemy, or follow my blog at StressFreeBill.com.

Also, the fifth group we are going to talk about are what is (probably) the largest group. These are people that are apolitical. They solidly resent politics being forced into their (escapist) entertainment options and are voting with their dollars. NFL ratings and attendance are down, ESPN is bleeding subscribers, Hollywood has suffered its worst summer Box Office in living memory, its award shows are tanking in the ratings, and its highest paid star (Jennifer Lawrence) has just announced she will take a two-year hiatus from film making.

There are those that try and justify the NFL’s political intrusion into entertainment by trying to claim that players have the right to express their opinion… No, they don’t. At least not while wearing the uniform. No employee has a right to make a public declaration that is detrimental to his employer’s business while ‘on the clock.’ As a matter of fact, the NFL is purposely violating its own rules to allow political comment at its venues…

These rules are found on pages A62-63 of the league’s game operations manual:

During the National Anthem, players on the field and bench area should stand at attention, face the flag, hold helmets in their left hand, and refrain from talking. The home team should ensure that the American flag is in good condition. It should be pointed out to players and coaches that we continue to be judged by the public in this area of respect for the flag and our country. Failure to be on the field by the start of the National Anthem may result in discipline, such as fines, suspensions, and/or the forfeiture of draft choice(s) for violations of the above, including first offenses. (emphasis added)

So, Mr. Goodell, if your excuse for rubbing politics in the faces of your customers is that ‘your players have a right to their own opinion,’ you have some explaining to do… The fans aren’t stupid. They know this couldn’t happen without the league’s consent. Your attempt to support the protests while implying your hands are tied is pathetic. You could at least show the same backbone as George Soros – he publicly declares that he places his own self-interest ahead of America’s.

So, what does it all mean? It means that President Trump is exactly right when he calls out the NFL for disrespecting the flag and anti-American behavior. It means that Ruling Class Oligarchs and leftist intelligentsia are succeeding in buying dissent and fomenting discord by manipulating others that have honest concerns and/or grievance. It means that the millions of football fans across the country are the second biggest losers in this whole orchestrated fiasco…

The biggest losers, however, are this sixth and final group we will mention. These are the people of color that, rightly or wrongly, have sincere grievance and would like open discussion on these issues. Once again, they have been manipulated to someone else’s agenda that actually hurts their own cause. Someday, hopefully, leaders will come along that can teach them to stop being manipulated into what feels good at the moment, and start pursuing political strategies that are effective. Until then, no amount of money is going to better educate poor black children. No amount of rioting is going to improve police relations, and no amount of anti-American protest is going to raise awareness or garner sympathy.