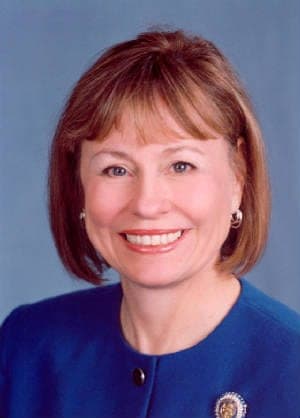 There is no question Sharron Angle is a strong supporter of President Trump’s Make America Great Again agenda and will stand up against the swamp. Despite an active 20 year involvement in politics she is also a small business owner, radio show host, and a former public school teacher of 25 years. She can replace a Ruling Class obstructionist to President Trump by defeating the incumbent, Mark Amodei (R-NV).

Mark Amodei is an attorney and professional politician who has spent almost his entire career on the public payroll. Furthermore, he has served in the US Congress for three and one-half terms and recently voted for higher spending levels by more than $143 billion. He supported Speaker Paul Ryan in a secretive budget process with no regular order, no amendments, no oversight, and no more debt ceiling (which is now over $21 trillion). He voted for Insurance company bailouts for Obamacare.

Mark Amodei voted to specifically deny any spending on a border wall. He did, however, see fit to vote for border security, including walls, for Jordan, Lebanon, Egypt, and Tunisia.

Regardless of his motives, Mark Amodei is acting as a Ruling Class Politician and certified member of the swamp

It is the concensus of PRC PAC that Mark Amodei should be primaried to allow a true servant of the people to take office.

For information on how to vote for and support Sharron Angle’s campaign, go HERE.