Home Blog 2017 June 1 Who Are the Ruling Class Oligarchs?

Who Are the Ruling Class Oligarchs? 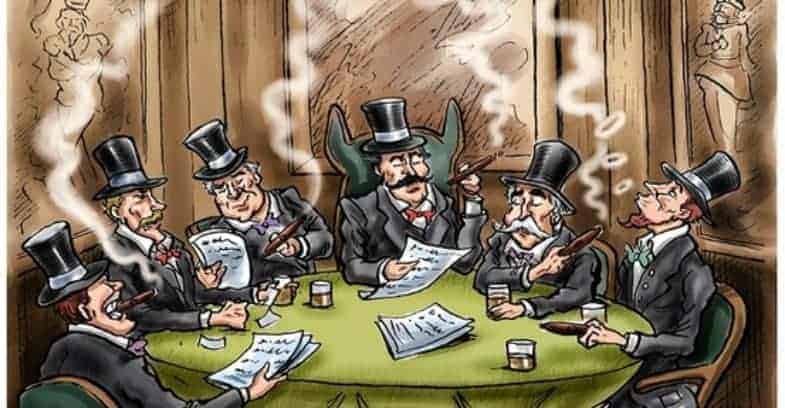 These are powerful people in America. Their power derives from vast wealth, or more specifically, the control of vast wealth. Some hail from ‘old money families’ while others represent Wunderkind entrepreneurs like Mark Zuckerburg. Many are CEOs of multinational corporations or managers of hedge funds, Reserve Banks, and Investment Banks. The junior leagues of this group include the still very powerful K Street lobbyists, some Union Bosses, and Political Action Committee (PAC) organizers.

Ruling Class Oligarchy noun / ruː.lɪŋ ˈklæs ˈol-i-gahr-kee /
A relatively small group of very powerful people that place their own interests ahead of any country, ideology, or set of morals and standards. They successfully use their wealth and influence to manipulate the political system to achieve their ends.

It is very important to note that not all highly successful, highly wealthy, or extremely powerful people should be thought of as Ruling Class Oligarchs. To interpret this article as advocating class warfare would be missing the point. It is StressFreeBill’s opinion that most people in this category are hard-working, good, and generous people. But there are definitely a number of them that seek power for a vision that has nothing to do with We the People.

Most Americans have no idea how powerful this group is…

To put the power of this small group into perspective, realize that 90% of the media in the United States is owned by just six corporations… and these corporations are controlled by only a handful of families.

Their interests, holdings, businesses, and opportunities are global.

They benefit tremendously when tariffs and trade barriers are removed. Their profits increase when given unencumbered access to virgin markets and allowed to use cheap foreign labor without regard to humanitarian or environmental concerns. In other words, their wealth and power increase dramatically when allowed to exploit the Third World.

What’s more, Nation States become an inconvenience when operating on this scale. Every country with its own set of regulations, currency, etc. disrupts profits. It would be much easier for multi-national interests if individual countries would dissolve their sovereignty and merge into a common system (like the European countries did with the European Union).

For many in the Ruling Class Oligarchy, political ideology is unimportant and is used as a tool to manipulate others. They could care less which party is ‘in power.’

The Democrat Party supports the reduction of US sovereignty via open borders, amnesty, and illegal immigration as well as through accords such as the Paris Climate Treaty.

The Libertarian Party supports the reduction of US sovereignty via open borders, amnesty, and illegal immigration.

Many establishment Republican politicians are on record to, in effect, reduce US sovereignty by supporting open borders, amnesty, and illegal immigration as well as by supporting accords such as the Paris Climate Treaty.

Is it just a coincidence that all parties mirror the agenda of the globalist Ruling Class Oligarchy?

Charles and David Koch are multi-billionaire Libertarians that have historically donated heavily to Republican candidates that support Immigration Reform (i.e. amnesty, open borders, etc.). For the first time in recent memory, they refused to support the Republican nominee for President (whom coincidently didn’t support an open border agenda).

George Soros is a multi-billionaire that funds a huge number of organizations that are almost exclusively trying to tear down American Sovereignty. Several of these organizations have been reported to support and fund violent protests against America First conservatives and controlled border politicians.

They both, along with many others in the Ruling Class Oligarchy, directly and indirectly, fund political candidates that support their globalist agenda. They may or may not believe in the rest of the silly stuff their parties advocate. StressFreeBill suspects that many of them are indifferent.

The Ruling Class Oligarchy doesn’t care what type of government America (or the world) has – they play at a level above governments.

So, the next time we see a protestor calling everyone a fascist, or a politician citing compassion as a reason not to enforce immigration law, or a Former Republican Presidential Candidate like Mitt Romney professing concern for the environment as the US pulls out of the Paris Climate Treaty… remember, there’s a good chance that the people pulling their strings couldn’t care less about any of it.

In the eyes of the Ruling Class Oligarchy, politicians, pundits, illegal immigrants, and We the People are all just tools to be manipulated.

Does that bother you…? It should.